skip to main | skip to sidebar

I am starting my 2010 blogging goal this week. I will post every Monday. Let's see how long I can last.

A client asked me to answer the following questions for their conference publicity. So, I thought I would share. Have a great week.

1. Why do you do what you do (three or four sentences)?

I always tell people the speaking business chose me. When I started, I had no idea people spoke for a living. I was just having fun, performing some improvisation games and talking about teamwork and creativity. If someone offered me a chicken lunch and a paperweight with a clock in it, I was thrilled. My wife says I found a way to combine my two passions: making people laugh and telling people what I think.


2. What is your most important professional goal (two-three sentences)?

My goal is to always have fun and be passionate about what I do. Everything else will take care of itself. I don’t have a job. I have a passion. From that passion, I am rewarded each day.


3. What, when and where was your first paid job (two sentences)?

I delivered a community newspaper, which came out once a week. I think I started the paper route around the fifth or sixth grade, and I gave it up during high school.


4. Your personal philosophy of life (three or four sentences)?

Stay hydrated. Always use sunscreen. Always recycle. Give back. Eat lots of fruit. Leave things better than when you found them. And everything goes better with laughter.

“It is not the critic who counts, not the one who points out how the strong man stumbled or how the doer of deeds might have done them better. The credit belongs to the man who is actually in the arena; whose face is marred with sweat and dust and blood; who strives valiantly; who errs and comes short again and again; who knows the great enthusiasms, the great devotions and spends himself in a worthy cause and who, if he fails, at least fails while daring greatly so that his place shall never be with those cold and timid souls who know neither victory nor defeat.”

Theodore Roosevelt, 26th President of the United States of America

6. What did you want to be when you grew up?

At different times in my childhood, I wanted to be a doctor, comedian and a writer. As Meat Loaf once said, “Two out of three ain’t bad.”

I read about 37 books a day. Most of them are about a large red dog, furry monsters, trucks, firefighters, a curious monkey, magic tree houses, dinosaurs, and other assorted talking cars and animals.

We attend the State Fair of Texas every year. Sometimes, we go twice.

The first thing I eat at the fair is a Fletcher’s corny dog. Everything else comes second.

I have to add some specifics. 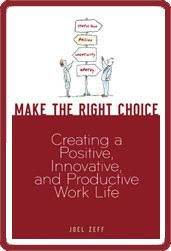 Learn more about my book at www.maketherightchoicethebook.com 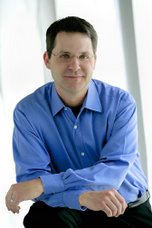 Learn more about my keynotes and workshops

The All Important Blog Roll

Joel Zeff and Joel Zeff Creative retain the ownership and rights to all original material. Original material cannot be reprinted or published without the written consent of the author.